That same Saturday after my trip to Gazi     I found myself still in the CBD and really wanting some steak. We were at the rooftop cinema and decided to hightail it to the James Squire Brewhouse for beer and food.

After we arrived I skimmed the menu and it all seemed to be in good order: char grilled a couple of sauces, chips or potatoes and three different cuts of beef. I went up to the bar and ordered a nine tails and the yerling scotch 300g ($38) medium rare, and the crushed potatoes with stilton cheese and onions as my side. Having to try the thief butter and red wine jus, I asked for both on the side. 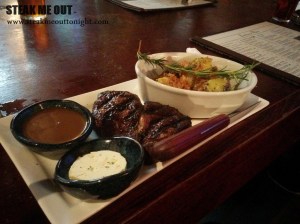 When it arrived it looked fantastic and smelled equally as good, nicely charred and smokey. I cut into one side and it was medium. A little less than impressed I cut into the other side and to my dismay it was well done. 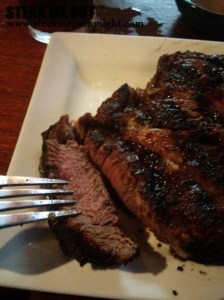 Now I’ve only sent back one other steak so far and that was because it was torrid. This however was just due to my shear disappointment, and expectation that for $38 from a place as reputable as the James Squire Brewhouse I would get a properly cooked steak.

About 20 minutes later my replacement arrived. It looked just as good and the aroma was similar to the previous one. This time however they had drowned it in the red wine jus, which was average at best.

The second steak was rare – and when I say rare I mean blue – but that’s to be expected after I sent one back for being overcooked. 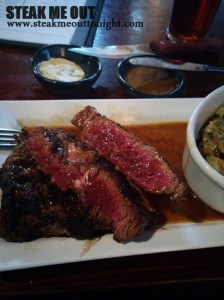 I didn’t mind it being undercooked as much as the overcooked one due to it still being really tender, seasoned great and a subtle yet delicious char. The potatoes were great, cheesy and rich, definitely a more interesting side compared to the chips.

Taking into account the overcooked nature of the first steak I scored it as follows.