Huxtable has been on my list of places to eat for a very long time, at least a year I think. The more I add to my list the more I forget about places, Huxtable being one of them.

I finally got around to making a booking and going one Saturday night with a couple of friends.

I had some idea of what I was going to order, but I decided to get the waiters opinion on whether the three of us could finish everything I wanted to try, and if he had any recommendations.

The smoked potatoes where finished and he said even though the twice cooked duck was his personal favourite, ordering that would be overkill.

In the end we ordered a couple of crab xo buns and the duck parfait (obviously) as entrees, then staggered the mains, starting with a Salmon ceviche and wagyu tataki coming out together with the heirloom tomato salad, then we were going to finish with the pork ribs and the corn salad.

The duck liver parfait came out first, served with pickled watermelon rind and croutons. The parfait was great, creamy, and rich and balanced in flavour. It stacked up against some of the best I’ve had. The watermelon rind was pickled, yet delectably soft and sweet, a perfect match.

The salmon ceviche came out next, followed closely by the xo crab buns and the heirloom tomato salad.

The salmon was done well, given just the right amount of time it was soft, tangy and creamy. The added avocado, pumpkin seeds gave it good texture making it a delight to eat. 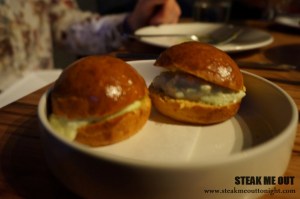 The buns were great, a good ratio of crab, buttery brioche bun and mayo, with the mayo having just the right amounts of thai basil and jalapeños to create a delicate and well-rounded flavour.

The tomato salad was along the same lines as the Brooks one I had last week. The heirloom tomatoes were much tastier in this one though, and with the flavours of the garlic and basil gently coupled with the creamy mozzarella, it was a pleasure to eat.

Next out was the Wagyu tataki; it looked measured and elegant. The slices all identical, and plated well, with a confit egg yolk garnishing the centre. As the waiter placed it down he told us to break the yolk and mix everything together; it created a smooth, velvelty, delicate and scrumptious dish which did not last long on the table.

We all dug into the last of the mains, the Korean Pork ribs and the corn salad with chipotle, going ribs first. Hot, spicy and crunchy morsels of meat and bone which we cooled slightly with a creamy apple slaw. My only complaint was that the outside was too crunchy, crossing the border to slightly overdone. Thankfully this didn’t affect the middle which was till juicy and tender.

The corn was nice, warmed with slightly stringy melted cheese and a composed amount of heat between the sweet corn and the hot chipotle; but it was disappointing as it’s very hard to make corn not look and taste like it came from a can. Additionally it felt as though you could re-create it at home, which is never what you want from a dish you order out.

After finishing all that the waiter came back with a menu for dessert, at this point I was determined to get 1, 2 at the most but he sold us on 3 different ones, the plum tart, the ice cream fudge sandwich and the dark chock delice.

The ice cream sandwich was out first, banana choc and vanilla fudge; it was nothing overly special but nice nevertheless.

The tart and delice came out next. The tart was fantastic, warm, crumbly pastry, sweet, tart and rich, a perfectly balanced dessert 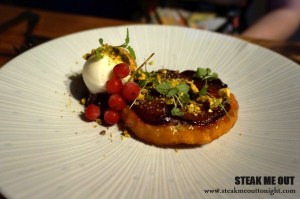 The delice was nice and rich. Chocolaty, plus a nice coffee hit with hints of orange finished with a nice texture given by walnuts. Whilst Great, it wasn’t as amazing as the plum tart, the standout dessert in my mind.

Good service, food and wine made for a great evening at Huxtable, somewhere I will most likely visit again in the near future.